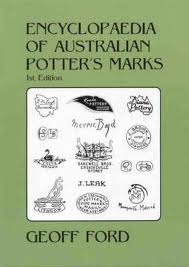 Potters marks are a unique identification mark which are found on the base, side or front of ceramic works.

As you can see each has a unique way of painting, writing or stamping their name/initials.

While I was studying at uni it never dawned on me to write my name on the bottom of my works.  I suppose I was in research mode and the last thing I could think about was signing my works.  In fact, it was difficult to sign my pendants as they were very fragile in the early stages of producing.  I was so worried about the design holding up in my wash/wipe method that I feared breakage was miniscule millimeters away…let alone trying to sign on the back!  It wasn’t till I met Xanthe from X Gallery that she came up with a round sterling silver disc to put on the back of my fired pendant and stamp my initials on the back.  I was so excited that I could finally make a mark. Well temporarily on my body adornment work…

This year, I’ve been experimenting and making new forms – small bowls and tiles.  When I laid eyes on an edition of Australian Ceramics I came across the Potters Marks page – there wwas a series of photos showcasing potters and their marks.  From initials, to hand written signatures to stamps and drawings I realised I could do anything. I doodled away in my scrap book hoping to come up with something…it took a while and then eventually I played with my initials AM and then thought PM as in potters mark.  Then I thought mmmm AM PM…as in the time….twee?? Well, as I’m a lover of words I realised that all I ever do is think about ceramics – almost 24hrs.  I moved the initials around and hubby (in his eagerness to be right as always) suggested:

Hey presto, I liked it…now all I needed was the letters and lucky for me, hubby had a set of beautiful old steel letter stamps in a neat blue box which had been handed down to him.  I loved it!  Something old but breathing new life not only for my work but a real potters mark. So here is my attempt:

Its rough but its early days and I’ll get lots of practice over the coming months.  I’m rather excited at having a potters mark.  I feel privileged to join the many artists around the world that have made their mark whether it be ceramics, glass painting, sculpture, textiles, print making, or photography (just to list a few). BTW – if there are any potters out there that can help Judith in “our new project to make the marks used by Australian potters easy to find on the Internet” visit her blog at Australian potters’ marks.

3 Replies to “Finding my mark…”